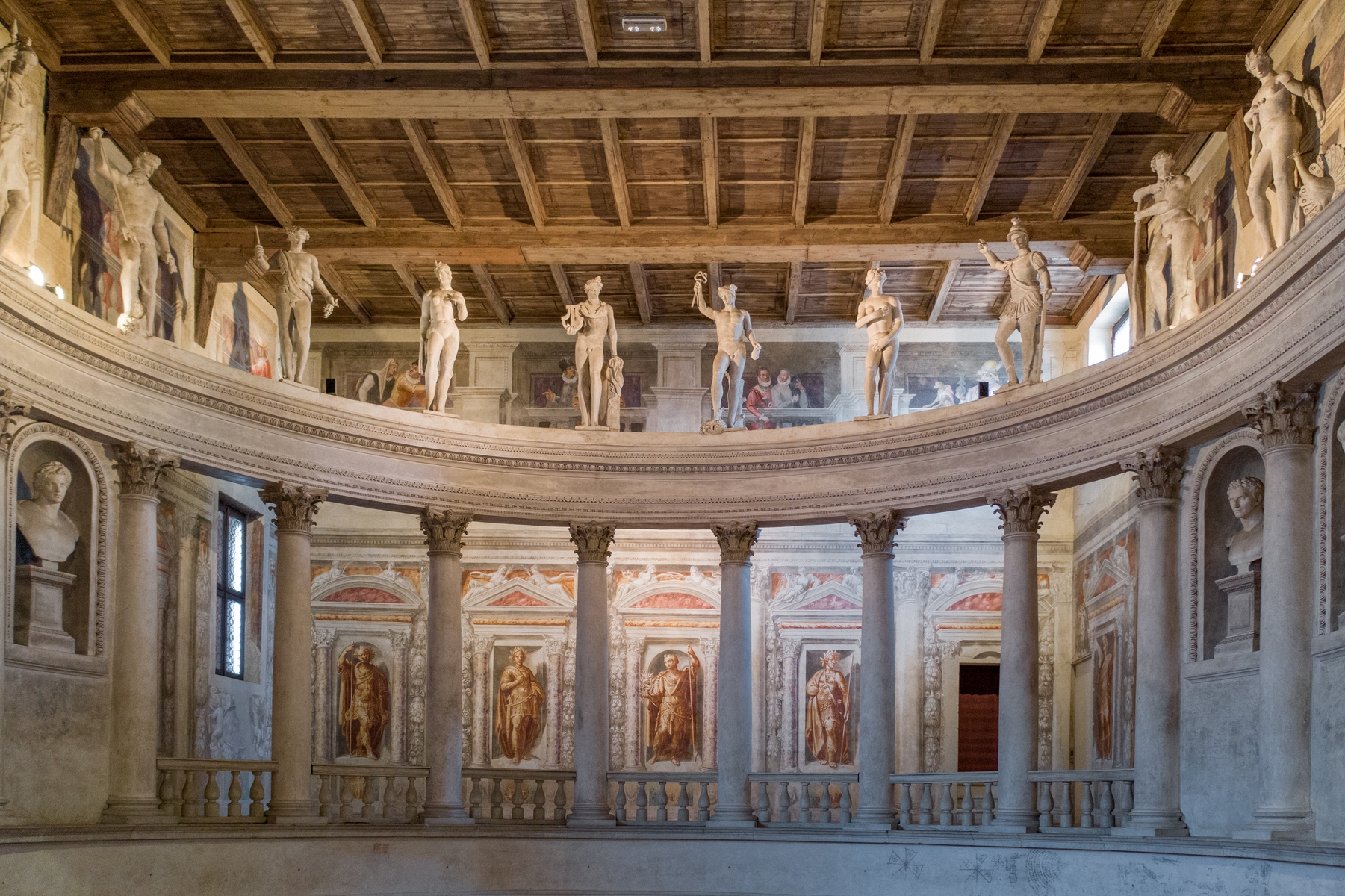 Vespasiano Gonzaga met the architect Vincenzo Scamozzi, a pupil of Palladio, in 1587, during a visit to Venice to receive the title of Venetian patrician. Scamozzi accepted the duke's invitation to come to Sabbioneta and design a court theatre. On 10th May 1588 the architect delivered the design for a space in the ancient style but with important innovations, which met with his client's approval.

Back in Venice, Scamozzi returned to Sabbioneta in 1589 to oversee the construction work, taking with him the stuccoist Bernardino Quadri, who was responsible for the interior Corinthian loggia, and several painters who frescoed the walls with two ancient-style triumphal arches, a fake loggia with period figures and a series of Roman emperors in monochrome. 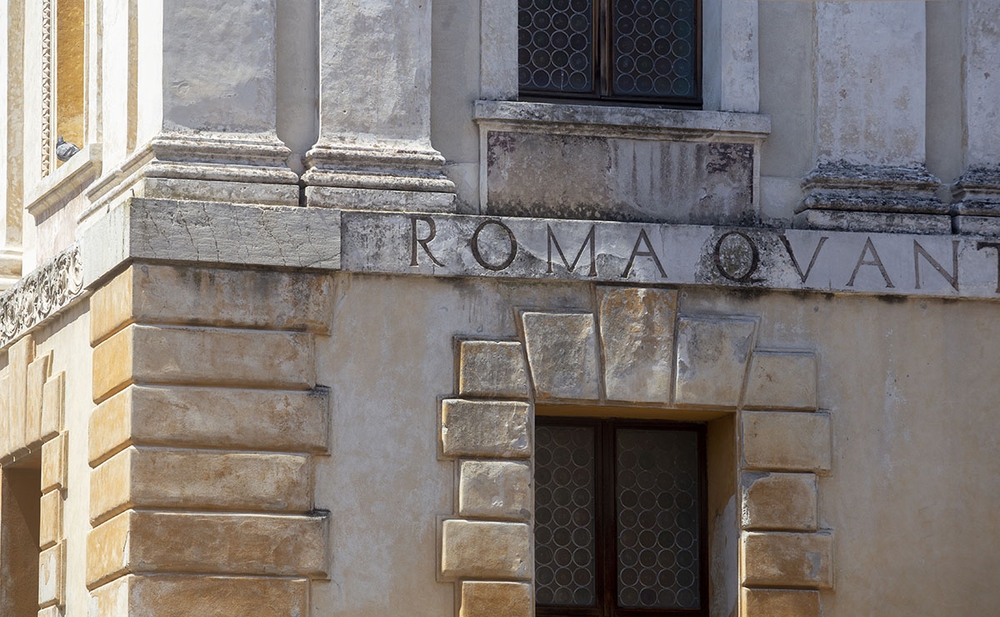 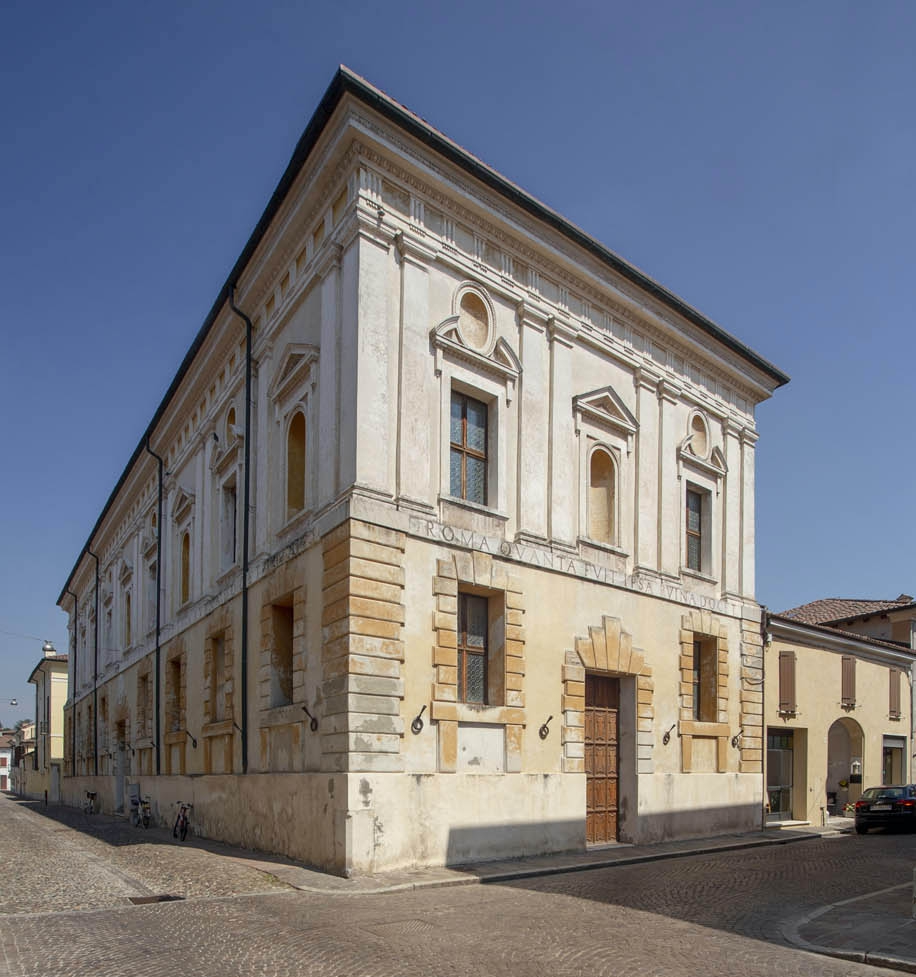 His construction of the fixed scenery was inspired by a treatise by Sebastiano Serlio (1475 – 1554).

When the theatre was completed in 1590, Scamozzi stated that he had created a space that could accommodate a large audience, with several small rooms at one end (the foyer) and, at the other, dressing rooms for the actors, as well as an area for the musicians. He equipped the theatre with seating for the nobility, and a loggia for the ladies. On stage the fixed scenery gave a perspective view of buildings constructed in painted wood, forming a large square with a central street leading off it.

The loggia is the site of the duke's epiphany (in the sense of his manifestation as a visible divinity), as a new emperor among the painted Caesars surrounding him. The roof is the shape of an upturned boat hull; with the ceiling of cane painted as the sky, it must have felt like being in an ancient amphitheatre. The stage, without proscenium arch, is connected to the two triumphal arches by painted shops. The ideal city depicted on the scenery continues to the painted ruins, indicating the grandeur of the Roman Empire. 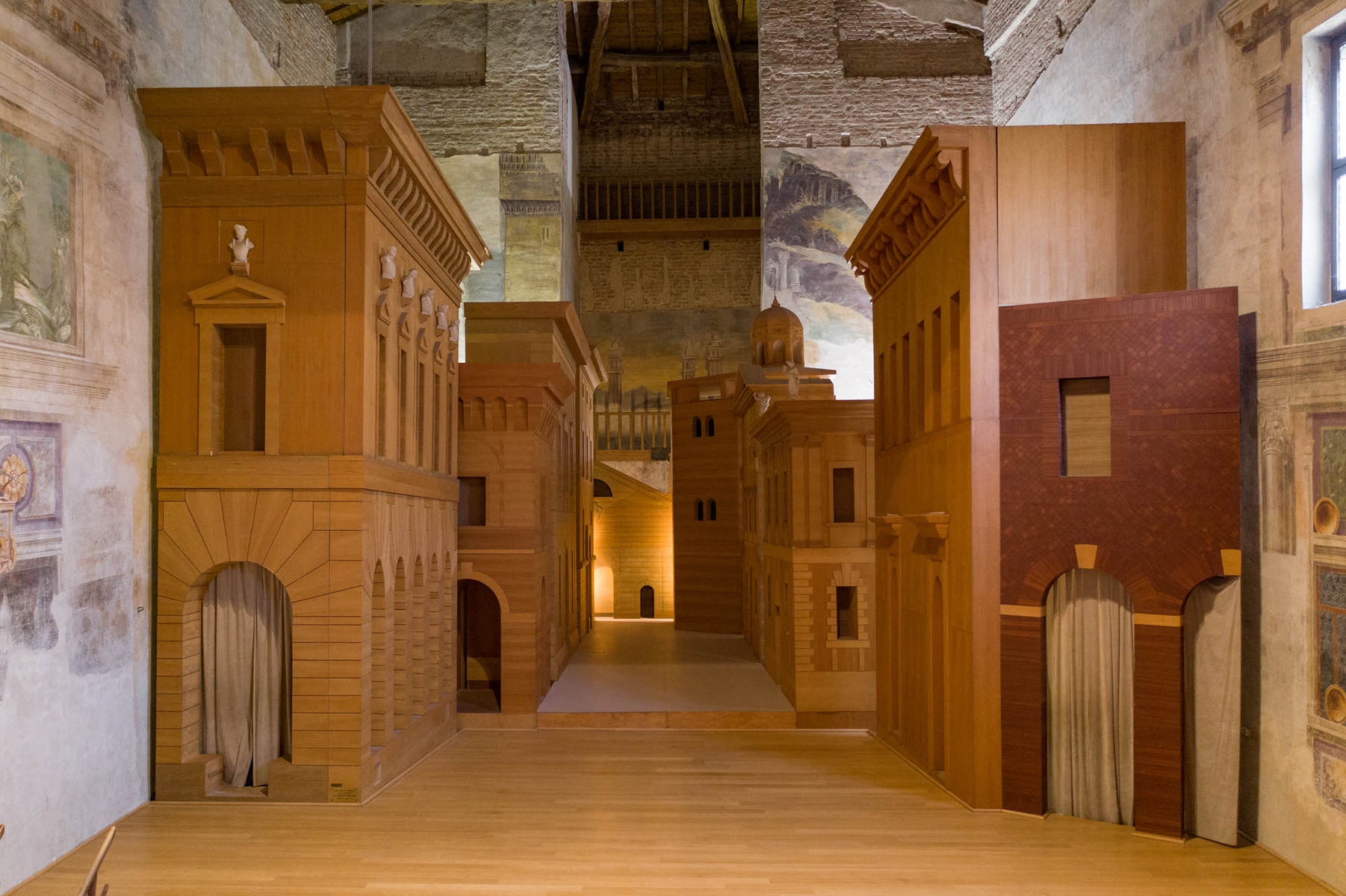 A bust of Cybele is placed in one of the niches as the divine protector of fortified cities, but also as a personification of Sabbioneta, in an intellectual game typical of late Mannerism.

It is not only the theatre, but the entire city of Sabbioneta that takes its cue from Classical models, as stated in the inscription in capital letters, repeated four times along the stringcourse of the cornice on the building's external facade. “ROMA QVANTA FVIT IPSA RVINA DOCET” (However mighty Rome may be, its ruin teaches), declaring to educated visitors the deep links, and even creative mould, between Sabbioneta and Rome.

Indeed, the modern city built by Vespasiano Gonzaga has the Urbe as its constant benchmark; rich in ancient legacy and testifying to the glory and power of the Roman Empire. On the side walls of the theatre, at the level of the orchestra, views of Rome appear between the arches of the painted Triumphal monuments: on the left, overlooking the scene, is the Piazza del Campidoglio, in which the Palazzo Senatorio retains its medieval appearance, with two side towers, while the Palazzo dei Conservatori, on the right, appears in its current form. Opposite is the Mole Adrianea and the bridge of Castel Sant'Angelo. These topographical views were taken from engravings in the book L’antichità di Roma by Andrea Fulvio, published in Venice in 1588, and at the time kept in the duke's library.

Above the Campidoglio arch is the inscription: QVANTVM ROM(ae) (extat) A RVINA D(icatum), and above the Mole Adrianea is a dedication to the emperor Rudolf II, who had elevated Vespasiano to the status of duke: 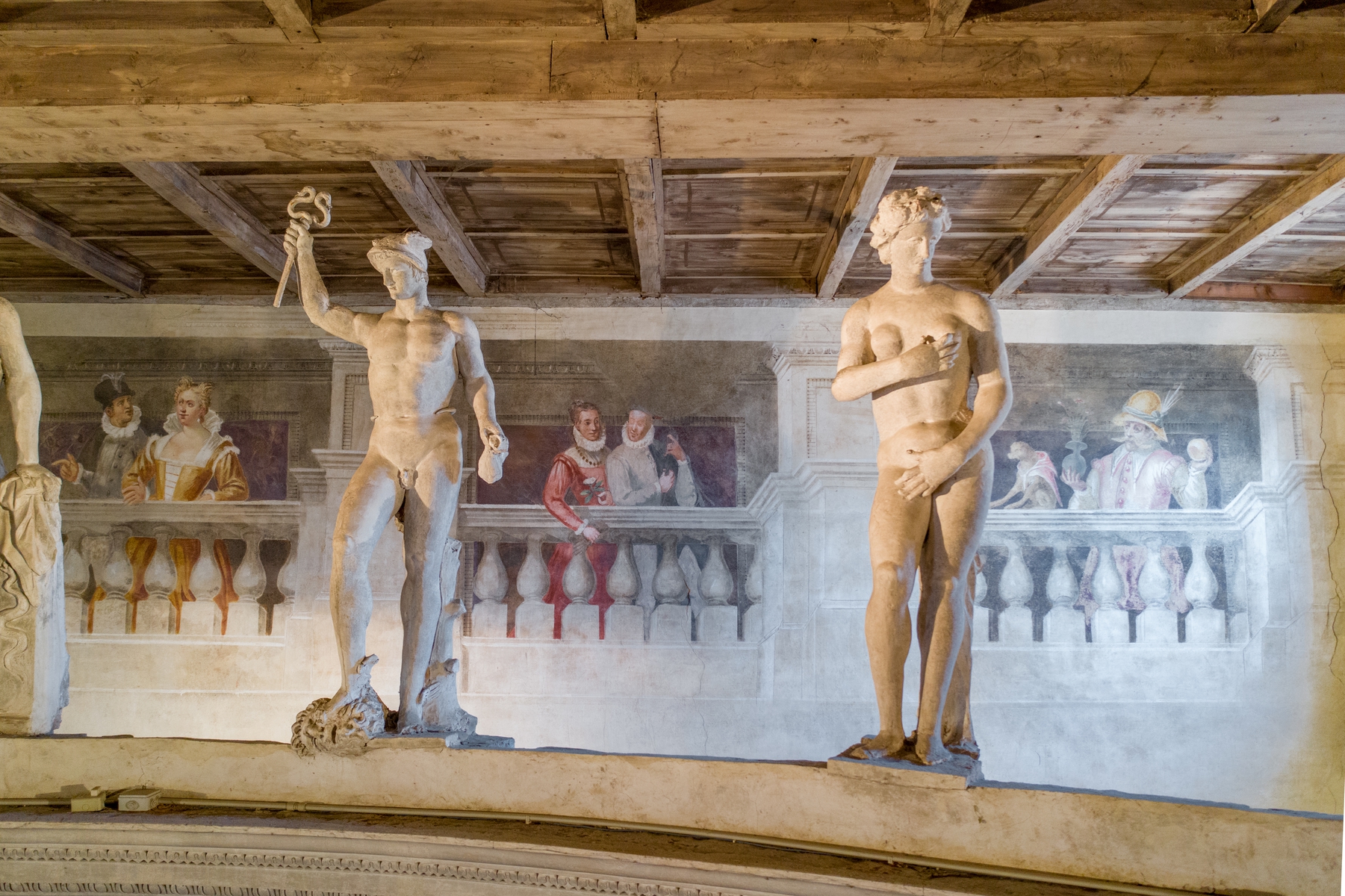 The effigies of the Caesars are painted full-length in monochrome on the wall backing the loggia. The central emperor is Titus Flavius Vespasian, shown removing his laurel wreath to offer it to the duke, who sat there during performances almost as if receiving the investiture as a Caesar in his "Novella Roma".

In alcoves at the ends of the colonnade are busts of the emperors Augustus and Trajan on the right, and on the left Alexander the Great, the most powerful military leader in antiquity, commemorating the duke of Sabbioneta's achievements in war.

Since 1996 the almost metaphysical emptiness of the stage has been filled by an imaginative reconstruction of the lost scenery. 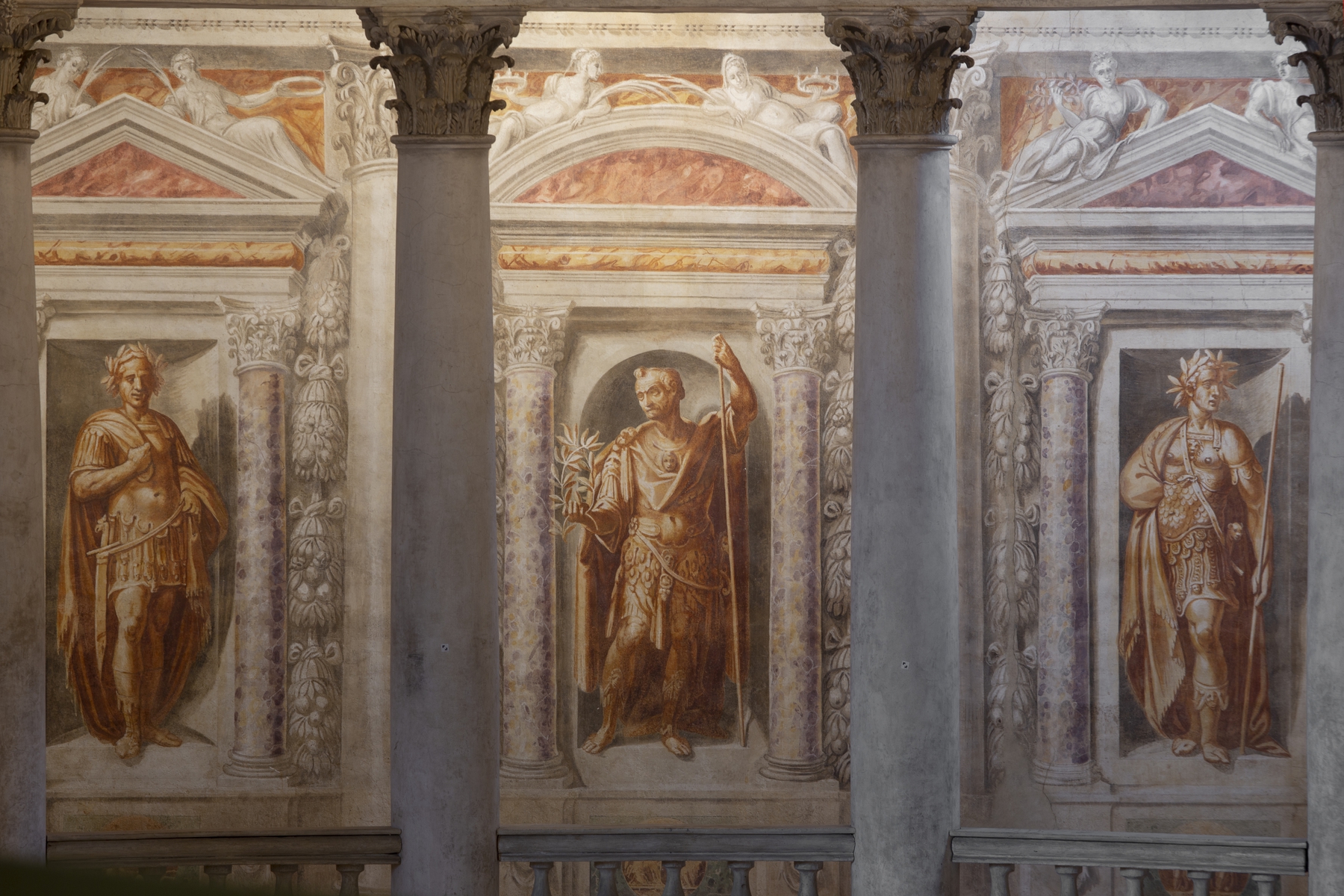