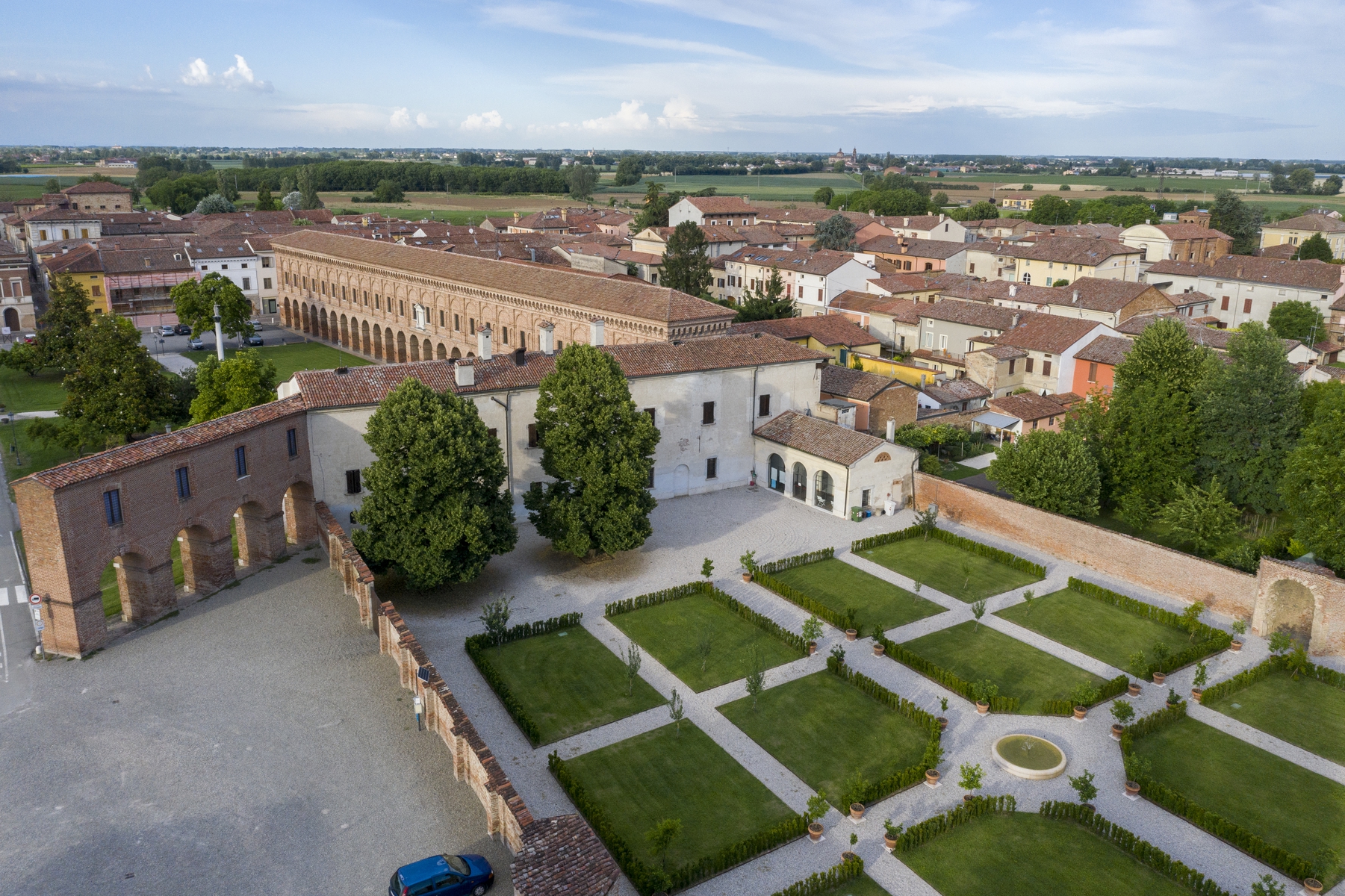 Also called the Casino, this was the prince's private villa, a place of leisure where Vespasiano retired to seek relief from the demands of governing. Here more than anywhere else the duke's personality is evident; his passion for classical antiquity and his humanistic ideals.

The palace is modest in size and characterised by an anonymous facade, plastered in white, in clear contrast to the gorgeous cornice of carved oak with brackets in the shape of lions' heads.

Construction began after Vespasiano's definitive return from Spain (1578-79) and was completed in 1588, when the exterior was painted with geometric patterns in fake marble, which are still visible on the upper part of the facade.

The original entrance from the square was the central door, bordered with red, white and black marble.

The two-storey building and its decoration were completed around 1587. Supervision of the decoration work was entrusted in 1582 to the well-known Cremona painter and pupil of Giulio Romano, Bernardino Campi, and his assistants.

In spite of its sober appearance, the palace's interior displays a decorative style based on Vespasiano's wide literary culture. It is highly likely that the duke himself gave instructions on the iconographic layout.

In 1584 a garden was created adjoining the palace; it was designed by Campi as an essential element of suburban life. A geometric green space with a fountain, three grottoes, water features and antique statues. The parterre is trapezium shaped and walled on three sides. At the centre of each side are arched alcoves (grottoes) paved with river stones and entirely encrusted with natural stalactites - a frequent feature in the 16th century; the niches have broad marble basins in the shape of sea shells (one is still functioning, the other two were moved in the 19th century to the parish church and used as fonts), topped by lion-head gargoyles.

In 1584 a fountain with a wooden dome was built at the crossing of the paths, giving the garden its name. Six years later pavilions were added, with oak columns topped by beams and alternating with cane jalousies. Grapevines climbed over the pergola, making a kind of wooden temple around the basin of the fountain.

The garden of the fountain retained its splendour until the early seventeenth century, when it was abandoned and fell into disuse. Recent archaeological digs have revealed the lead water system which powered the jets and water features in the late sixteenth century.

On the ground floor:

On the piano nobile: 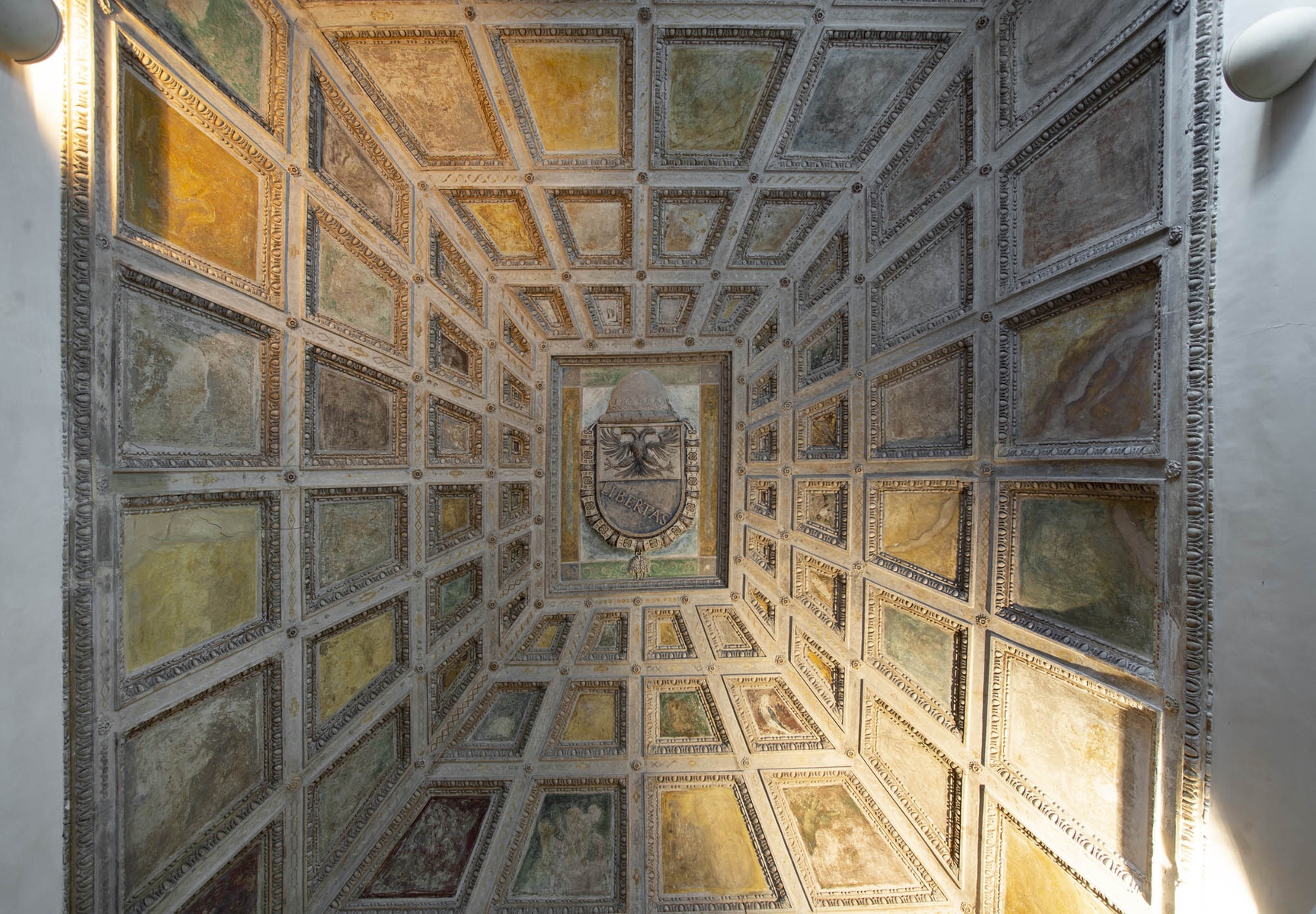 The cloister vault is divided by cornices of carved and gilded stucco, converging on a central panel bearing the multi-coloured ducal coat of arms, surrounded by the collar of the Chivalrous Order of the Golden Fleece.

The other panels display traces of frescoes, with cameo figures and animals.

The multi-lobed central section of the barrel-vaulted ceiling bears a portrait of Venus, driving a chariot drawn by doves across the sky. Two Cupids also appear, along with monochrome scenes from mythology.

The tondos of the lunettes contain the Virtues: Justice and Fortitude. The remaining panels are decorated in the grotesque style, with satyrs, putti, real and chimeric (fantastical) animals, mythological figures and Olympian divinities.

This room gives access to the Hall of Mirrors on the piano nobile. 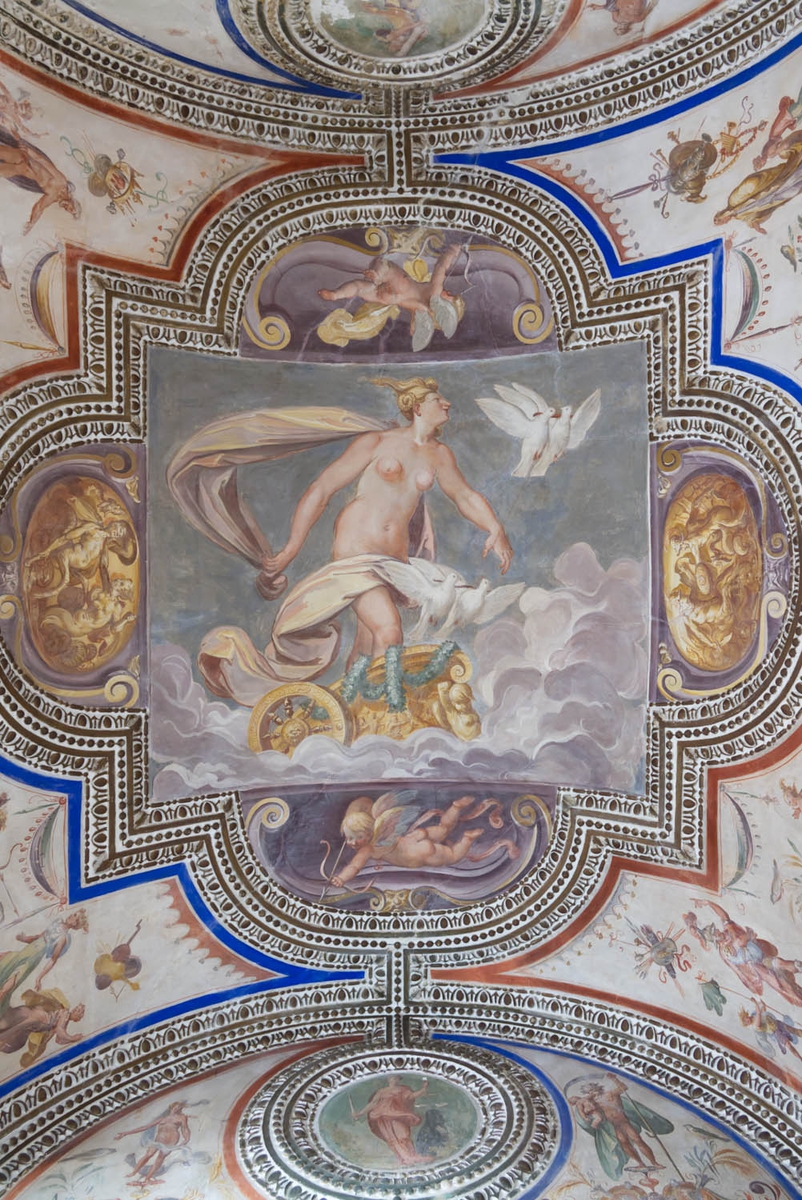 The ceiling is a lowered barrel vault. The decoration depicts a sky filled with storm clouds by the action of the six great winds of antiquity, represented by the heads of putti blowing with puffed cheeks; their names are Africo, Aquilone, Circio, Coro, Favonio and Subsolano.

Several birds fly freely among the winds, while in the corners of the room trees and bushes can be seen, bent by the fury of the elements. Traces of frescoes (attributed to Bernardino Campi) indicate that the walls were also completely painted.

The fireplace in red Verona marble has a pair of brackets sculpted as cornucopia (horn of plenty), from which spill leaves and fruits.

The ceiling is divided into five sections by carved and gilded stucco cornices. The central panel bears a painted country scene, with animals drinking from a trough. The larger ovals contain two Biblical scenes: the Judgement of Solomon and the Sacrifice in the Desert.

The oval panel on the wall nearest the square contains a depiction of Alexander the Great seated with Winged Victory in his hand, accompanied by the couplet: HIC MARIS ET TERRE IMPERIVM SIBI MARTE SVBEGIT/RAPTVM CAELVM SI LICVISSET ERAT.

(This man conquered dominion of the earth and sea with Mars [war] - and, by rights, the heavens would be grasped by him).

(Obtaining first power over the Roman people, Caesar merited veneration with divine honour [as a god]).

The other panels show paintings of combat between beasts, including lions, dragons, deer and bulls. Below the cornice there are eight recesses with basins and brackets.

The name was discovered in ancient inventories of the palace.

The whitewashed walls and ceiling show no trace of paintings.

This room was home to the marble bust known as "Virgil", today in Mantua.

Hall of Caesars (passageway on the piano nobile)

The walls are painted with a peristyle (porticoed courtyard) with double columns and painted statues of the Caesars placed between the columns.

On the end wall, Minerva, Winged Victory in her hand, is flanked by two prisoners tied to tree stumps. Beside the window, winged Fame holds a trumpet.

The ceiling is decorated with grotesques and features two cross-beams attached to a barrel vault.

Lunettes contain large monochrome roundels with profile and full-length portraits of a number of emperors. The two lunettes at the base of the small adjoining barrel vault contain monochrome battle scenes.

The multicoloured marble floor is original.

Hall of Circuses (Baucis and Philemon)

The long walls are frescoed respectively with the Circus Maximus and the Circus Flaminius in Rome, from engravings dated 1582 by Antoine Lafrery, while the short wall shows an urban scene.

Opposite, a painted arch frames a rural landscape, painted by a Flemish artist.

The ceiling is divided into sections by an elaborate stucco cornice, executed by Giovan Francesco Bicesi, known as il Fornarino.

The central panel contains a winged figure holding the ducal coat of arms, flanked by two lions and two cranes holding the legendary stone, symbol of Vigilance (if the crane falls asleep, the stone drops into the water, waking the bird who returns to its vigil).

The fourteen lunettes, painted by Bernardino Campi, represent the mythological fable of Baucis and Philemon, from the 8th volume of Ovid's Metamorphosis, in which Jupiter and Mercury come to earth to see whether among the mortals there is anyone worth saving before they unleash the flood.

The cloister vault boasts an elaborate stucco cornice, sculpted by il Fornarino and gilded by Martire Pesenti; on the ceiling are oval panels depicting the myths of Daedalus and Icarus, Arachne and Minerva, Phaethon, Apollo and Marsyas. The central panel portrays an infrequently depicted myth, that of Saturn and Phylira, whose union led to the birth of the centaur Chiron.

The frieze includes basins with stands, alternating with panels of Gonzaga motifs or conceptual combinations of allegorical figures with mottoes:

In the sixteenth century the stands contained busts of Roman emperors, and the long domed vault above the window contained the Sleeping Cupid with two serpents, a marble copy of the original, and beautifully made by a Venetian sculptor in the first half of the 16th century; these can currently be seen in the Museum of the Ducal Palace and the City Museum in Mantua (Palazzo San Sebastiano).

The double window was divided by a small spiral column in serpentine marble with base and capital in antique yellow.

The beautiful inlaid marble cladding the lower parts of the walls, the floor and the fireplace was removed in 1774 by order of the Austrian authorities and moved to Mantua where it was used to restore several rooms in the Ducal Palace. This explains the desolate emptiness of the palace, plundered of all its treasures to inappropriately embellish other places. 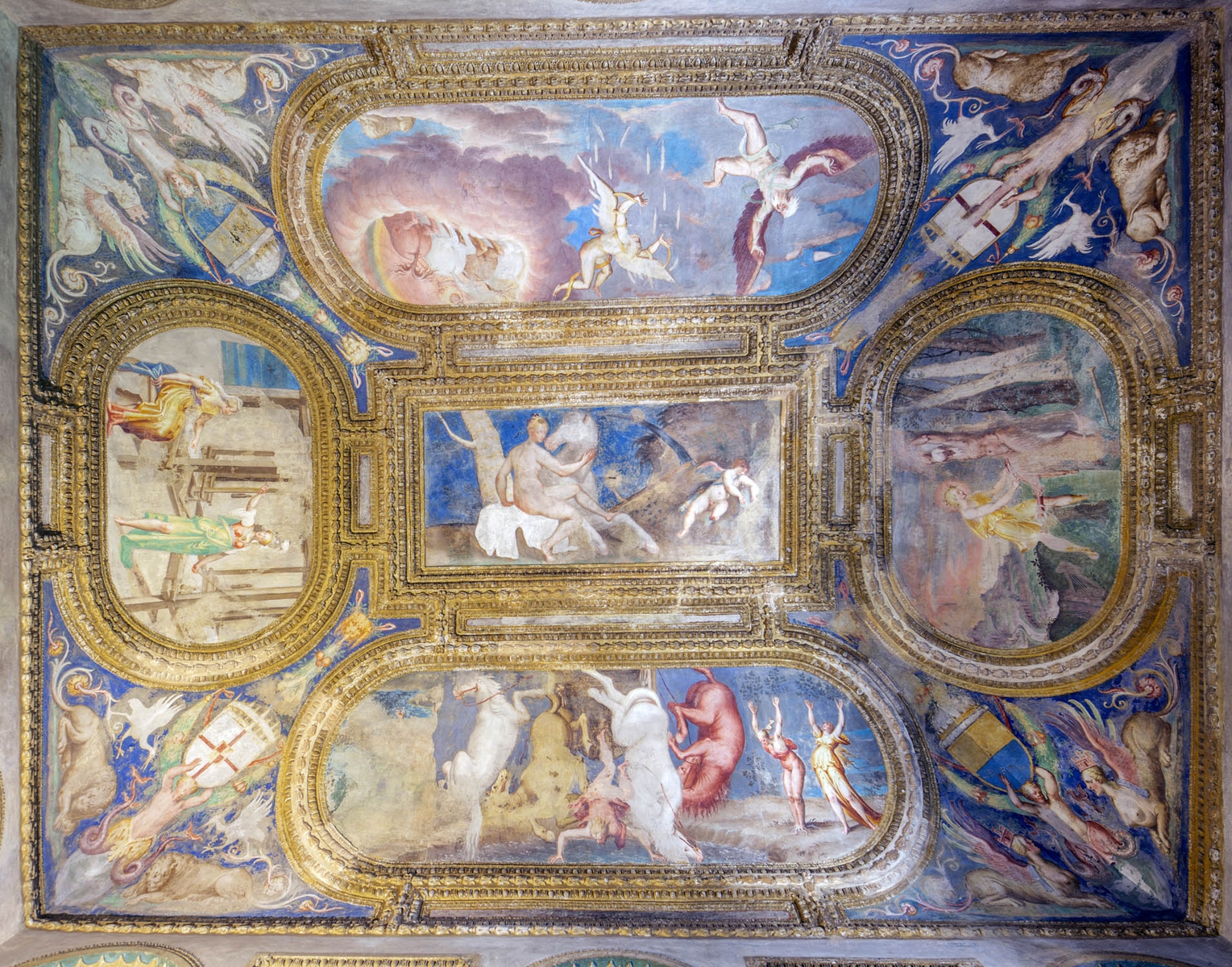 The corridor is painted with four episodes from the well-known myth of Orpheus, son of Oeagrus and the muse Calliope.

Chamber of Aeneas or the duke's study

This is one of the most exquisite rooms in the palace, and the study of Duke Vespasiano.

The walls display eight episodes from the Aeneid, painted in 1585:

The semi-spherical vault is divided into several sections by an elaborate stucco cornice.

In the five octagons, Bernardino Campi painted putti carrying the attributes of several divinities. In the smaller sections he painted exotic animals, hybrid figures and birds. The meticulous and detailed portrayal of the animals displays the Flemish style so beloved by Vespasiano, who was a great collector of paintings from the Nordic countries.

The stucco ovals of the ceiling depict the four cardinal Virtues (Justice, Fortitude, Prudence and Temperance).

At the base of the small dome, sculpted panels show personifications of rivers.

The lower part of the ceiling features three stucco bas-relief panels with scenes of Roman life.

Above the window are the duke's coat of arms, with the imperial eagle, the inscription LIBERTAS and the Gonzaga-Colonna insignia.

The fireplace is Pietra di Paragone with the duke's motto, while the floor is original multicoloured marble. 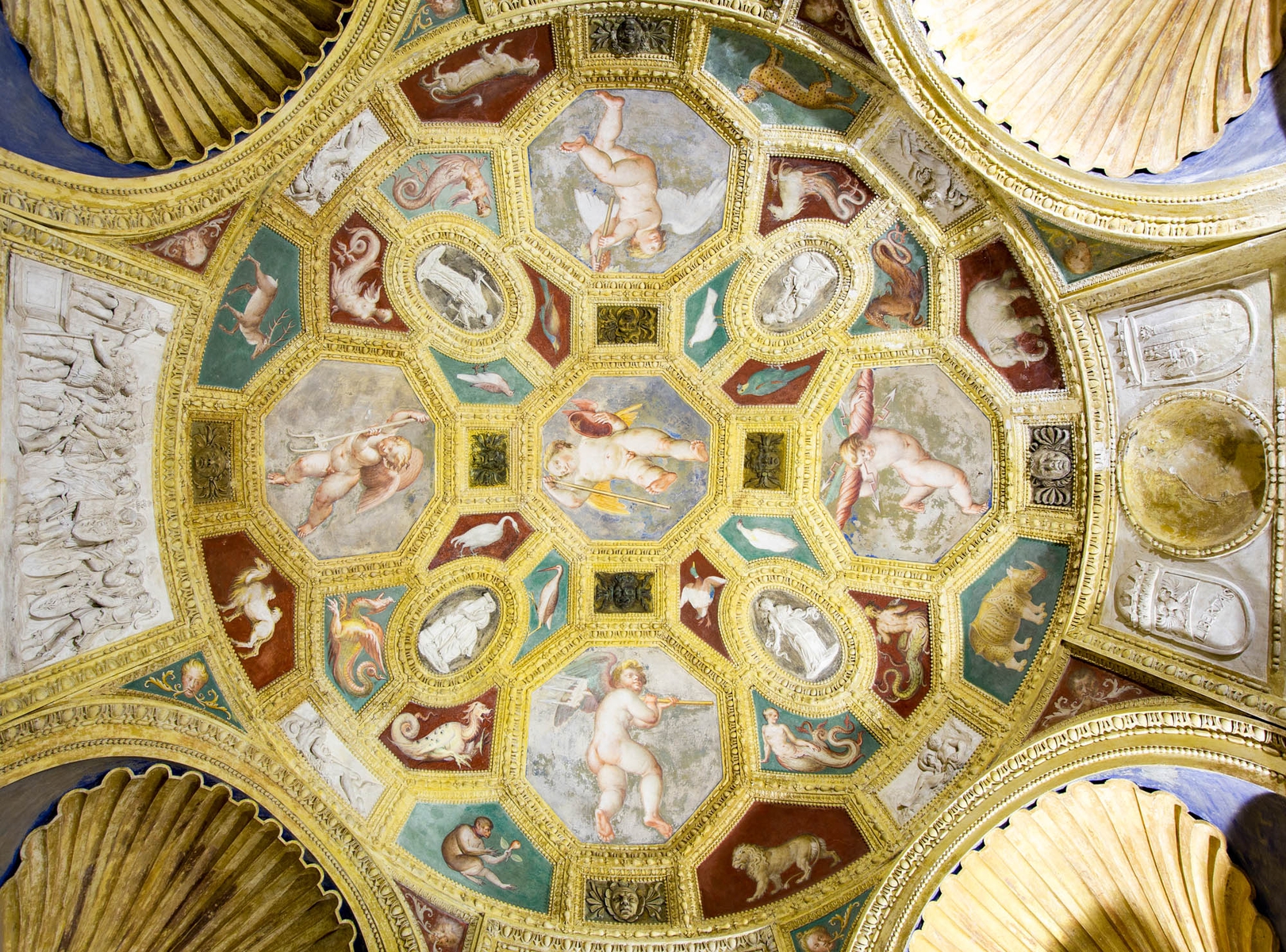 This is the largest room in the palace, and was used for court celebrations. Two grand Venetian mirrors were placed in the blind arches on the short walls, while the five sections of the ceiling were filled with more mirrors or painted canvases. These furnishings were removed in the eighteenth century and lost track of.

Beside each window and the door to the adjoining gallery, there are pilaster strips (lesenes) decorated with weapons and objects bound together by drapery that begins from a lion's head (panoply), painted by pupils of Bernardino Campi.

Between the windows are four panels with frescoes of landscapes, executed by a Flemish painter working at Vespasiano's court in 1586. Above each window is a rectangular stucco panel depicting legendary Roman heroes: Fabius, Atilius Regolus, Romulus and Remus, Horatius Cocles, Caesar at the Rubicon, Decius Mus.

On the short walls, flanking the blind arches and above each door, there are stands with basins that once held antique busts.

A small but delightful room whose walls are entirely decorated with grotesques, embellished with a stucco ceiling depicting a network of spirals framing the head of the Gorgon. This is perhaps the most atmospheric place in the palace.

Under a small temple on the central wall are the three Graces: Aglaea, Thalia and Euphrosyne. The other walls are painted with allegorical and mythical figures, set in a fantastical scene with birds, dragons, nymphs, satyrs, wild beasts and trophies of arms.

The exquisite grotesque-style decorations (depicting fantastical figures) and the stuccoes were the work of il Fornarino.

This chamber was used as a dressing room for ladies.

In a room separated by a wall is the spiral staircase that led to the garden, decorated with plant motifs and ivy leaves. 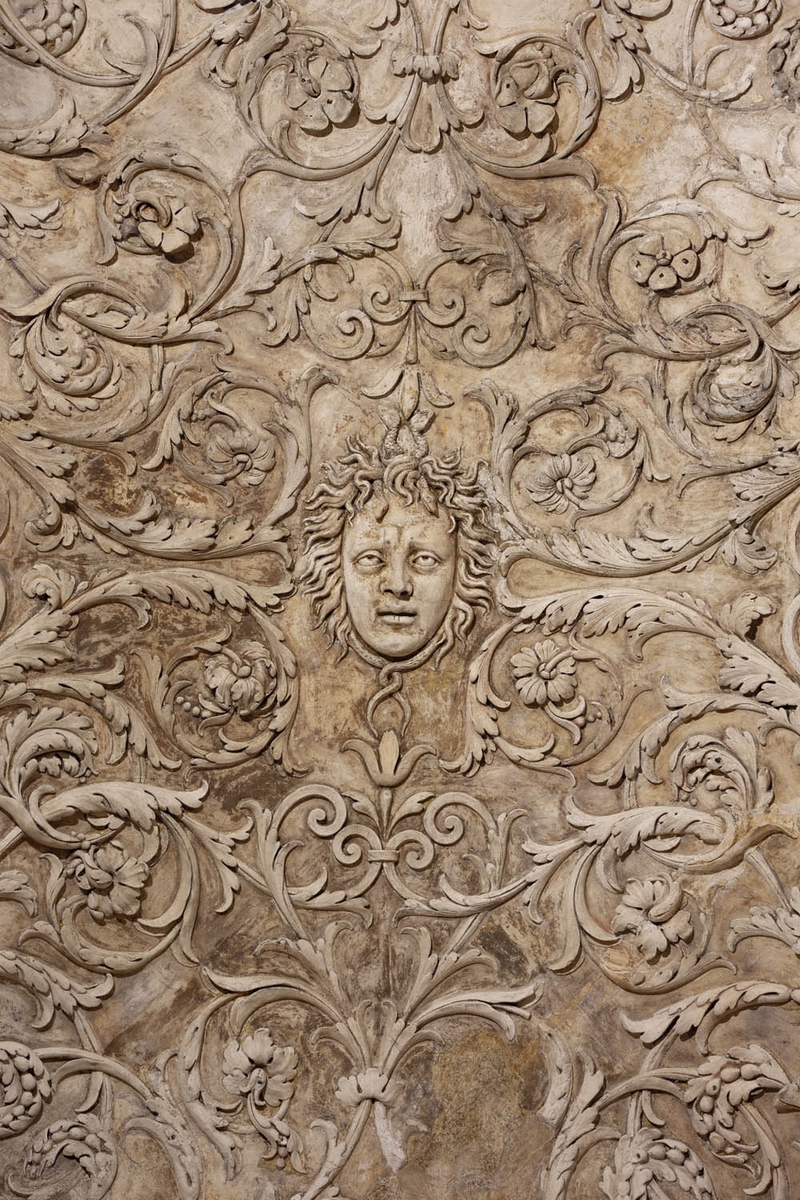