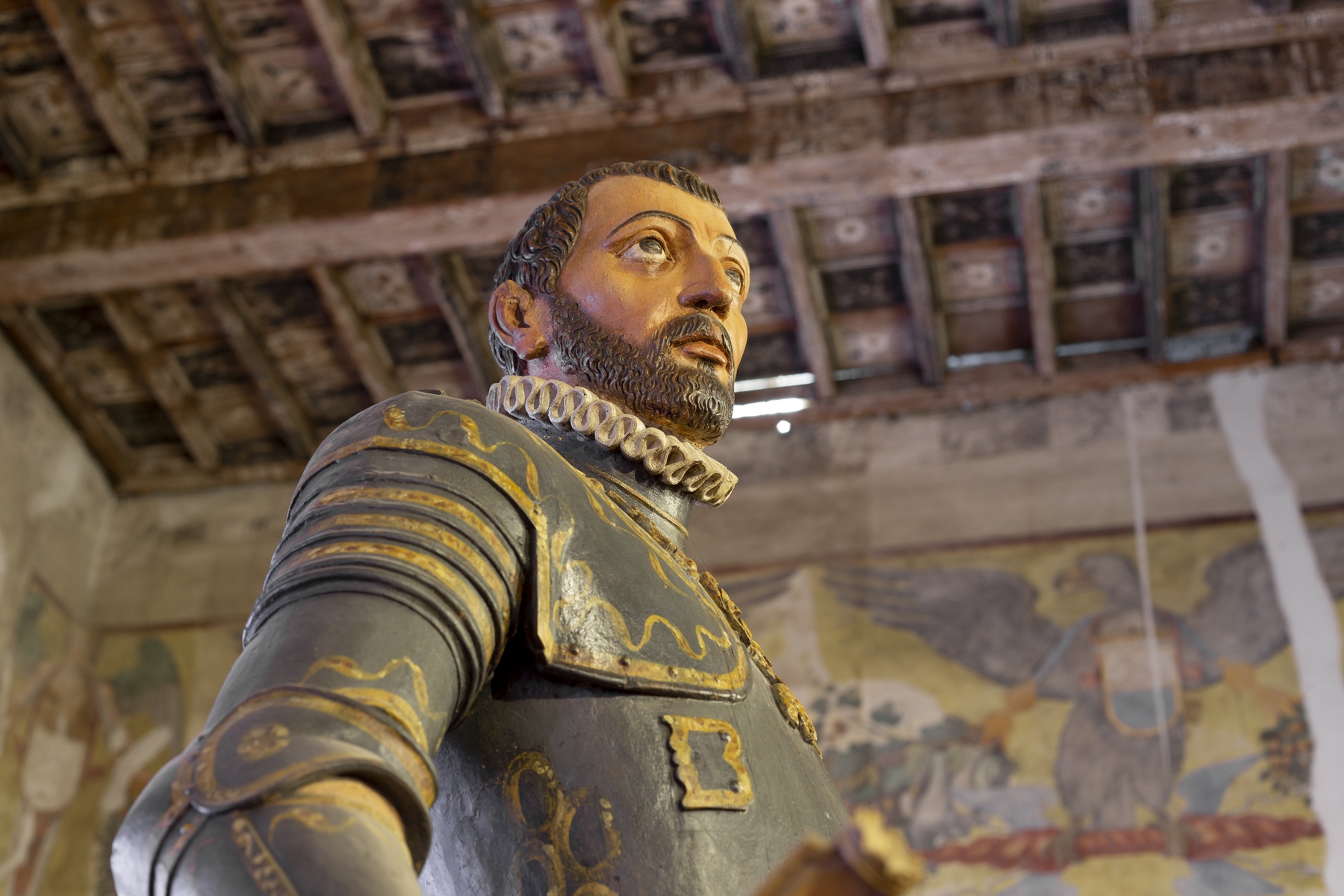 Vespasiano was born in Fondi (in the present-day province of Latina) on 6th December 1531. The son of Isabella Colonna and Luigi Rodomonte Gonzaga, he lost his father at the age of one, and was entrusted to the care of his paternal aunt Giulia Gonzaga Colonna, with whom he spent his childhood in Naples and Rome.

Still a teenager, he was invited to Spain, to the court of the man who would later become Emperor Charles V, as a page of honour to Prince Philip, the future king.

In 1549 he married the Sicilian noblewoman Diana Cardona, who died in mysterious circumstances in 1559, perhaps forced to take poison when her husband accused her of adultery. Her alleged lover, Giovanni Annibale Raineri, died with her. However, the official report of her death referred to a stroke. She was buried in the church of San Rocco in Sabbioneta and hence forgotten.

Vespasiano returned to his city, now a rural village, in 1556. Following in the footsteps of his grandfather Ludovico, he embarked on a project of modernising the city in terms of its urban layout and social and political life. Designed by Vespasiano himself, who drew on his own experience as a military architect, Sabbioneta was built in thirty-five years, following humanist principles of rationality and scientific cohesion, steeped in philosophical ideals and ethical values.

Vespasiano married Anna d'Aragona, the cousin of King Philip II of Spain, with whom he had three children: in January 1565 the twins Isabella and Giulia (who died immediately) and, in December the same year, a boy, Luys. The latter died before reaching his fifteenth birthday, leaving his father without a male heir.

Vespasiano's second wife died of illness in the fortress at Rivarolo Fuori in August 1567, and Vespasiano married for the third time with Margherita Gonzaga, the daughter of Cesare and Camilla Borromeo, lords of Guastalla; there were no more children.

In 1577 the emperor Rudolf II had raised the fief to the rank of duchy, granting him the privilege of a personal coat of arms, and thus freeing him from his Mantua cousins. 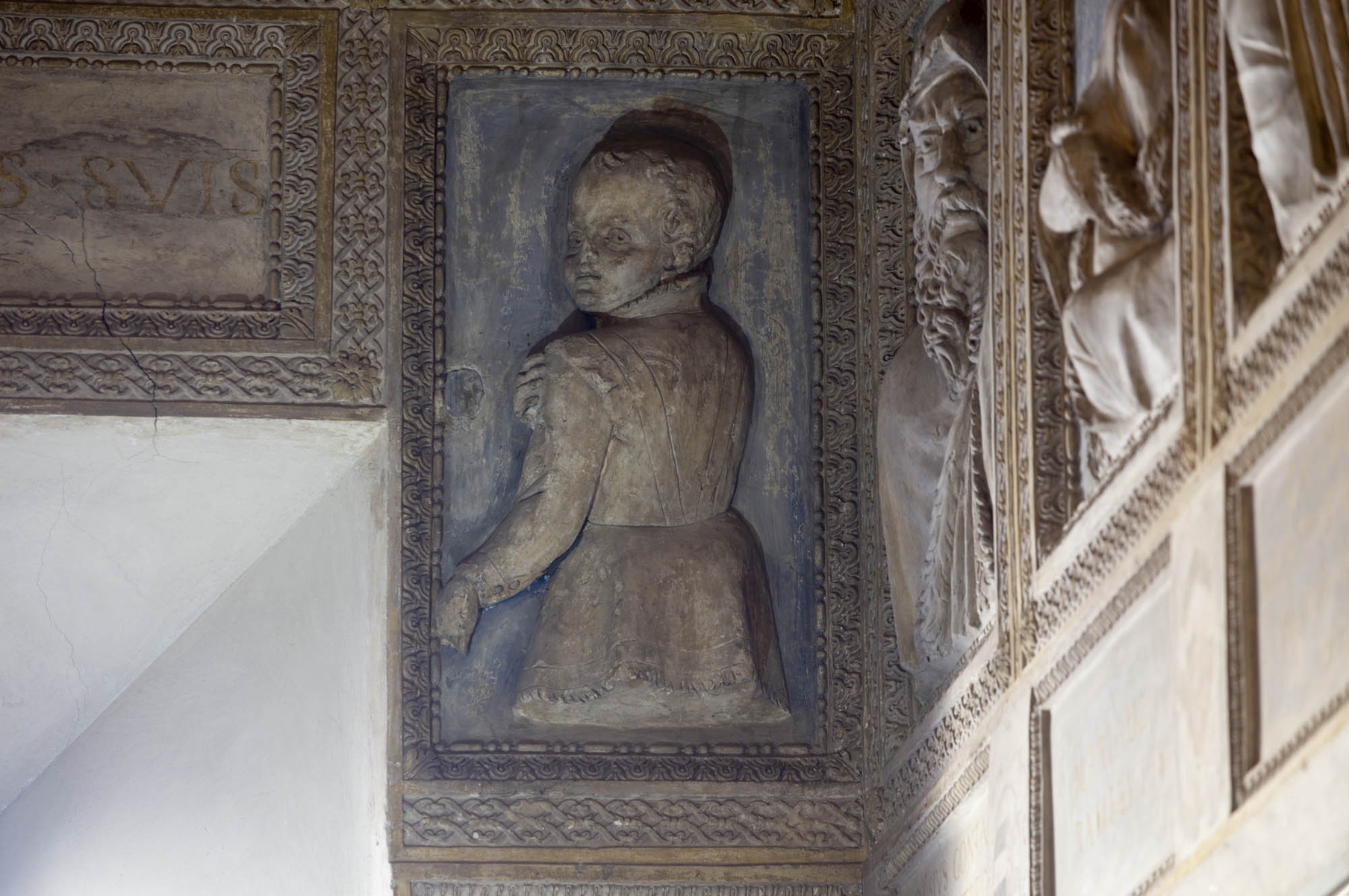 Vespasiano served as a soldier for the Spanish royal household, to which he was always loyal, and in 1571 the Spanish king honoured him with the prestigious title of Viceroy of Navarre and Valencia. In recognition of his many achievements, Philip II bestowed on him the collar of the Order of the Golden Fleece in September 1585.

Suffering from syphilis, in 1578 he underwent a delicate trepanning operation carried out by the court surgeon Antonio Amici, to alleviate the intense migraines that had afflicted him for years. The operation allowed him to live for another 13 years; he died on 27th February 1591, immediately after completing a further extraordinary artistic monument to his future memory and a retelling of a legendary city: the Teatro all'Antica.

In sixty years he succeeded in reconciling the work of professional military captain and diplomat, town planner and military architect, legislator and statesman, gifted scholar and passionate patron. What emerges, even today, is the worldview of the "ideal city", of which Vespasiano was the brilliant inspiration and creator.

His tomb, placed in accordance with his will in the church of the Incoronata, was opened on 4th July 1988 during restoration work. Inside were the remains of his bones, along with those of Anna, Luys, Giulia and a headless skeleton of unknown identity. In the mud lay the pendant of the Golden Fleece, which the duke wanted with him on his final journey.

His daughter Isabella was appointed heir to all his property, and married Luigi Carafa, a prince of Stigliano. Following their death, in 1638 the fortress of Sabbioneta passed to Vespasiano's granddaughter Anna Carafa, who handed it on to his last descendant, her son Nicola de Guzman, who held it until 1684.