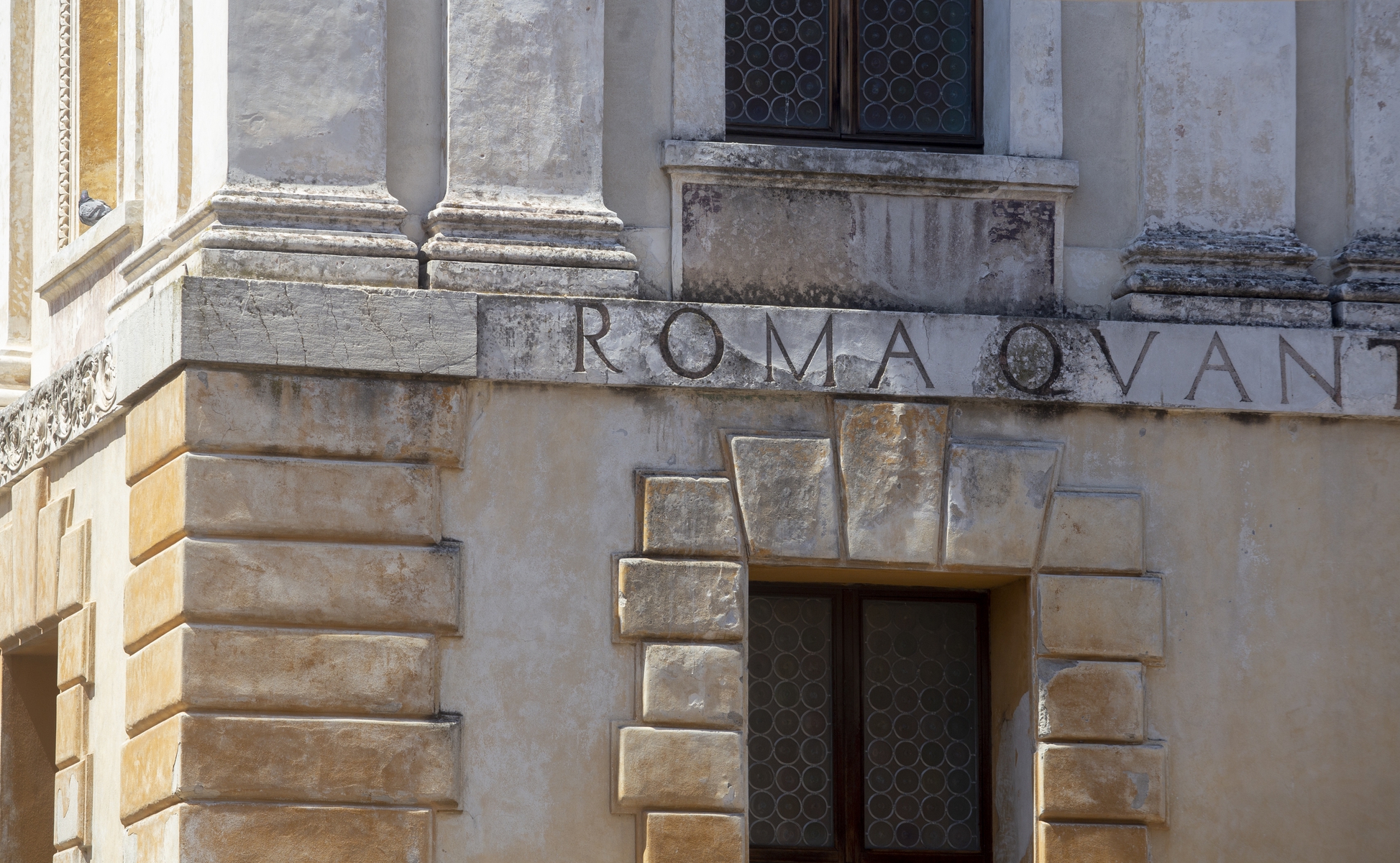 THE ORIGINS AND EVENTS OF A CITY

However great Rome was, its very ruin teaches

The settlement of Sabbioneta is documented on a gravestone dated 591 AD, which describes the small urban agglomeration as an Oppidum, or fortified place. It stands on the site of an ancient settlement in a swampy area, a Roman camp set beside the imperial road known as the Vitelliana. Later, during the Lombard domination, the castrum was ruled by a gastald, and then donated by Charlemagne to the Benedictine monks of Leno. In the 11th century the curtis of Sabbioneta was granted to the Germanic Persico family, who built a castle and defensive walls.

Ownership of Sabbioneta alternated between the Persico and Dovara families until 1314, when it was occupied by the Bonacolsi; from 1361 it passed into the hands of the Gonzagas of Mantua.

In 1496 Ludovico, the paternal grandfather of Vespasiano Gonzaga Colonna, set up home in the castle, and around 1520 he moved the court of Gazzuolo there because of discord within the family. He refurbished the castle and the ancient church of San Biagio, which he chose as the family's place of worship.

The medieval settlement was separated from the castle by a moat and the road to the dossi, a prolongation of the ancient Roman decumanus. Running perpendicular to this was the Via Vitelliana, which separated the village from the unsanitary swamp that surrounded it and caused frequent epidemics.

On the death of Ludovico in 1540, Sabbioneta retained its medieval appearance, characterised by an urban area scattered around the church of San Biagio, run since 1448 by a community of Servite monks. Ludovido had undertaken an urban redevelopment and built a fortress, which has now vanished. At an early stage - 1554 - Vespasiano extended the area on three sides, and from 1556 he carried out a radical transformation of the village, adding first a pentagonal perimeter wall and later a hexagonal one. The work was done over a period of thirty years, and in three phases, from 1556 to 1589.

The first phase included the construction of the Porta Vittoria at the mid-point of the wall between the bastions of San Nicolò and Santa Maria; the second phase entailed a version of the bastion of San Francesco, further back and made only of earth, and the building of the Porta Imperiale; the first months of 1589 saw the completion of the extended bastion of San Francesco, designed to protect the Casino (today Palazzo Giardino) and strengthen the most vulnerable part of the fortress - the castle.

The fortified town was surrounded by more than 3 kilometres of walls and an external ditch which could be flooded with lock systems and was 35 metres wide in front of the bastions and the castle. Beside the moat ran a covered defensive terrace in earthwork; maximum visibility was ensured by a large flat space known as La Tagliata. It was therefore a modern fortress designed in an age when the use of firearms was widespread and appropriate defences were implemented everywhere.

Built between 1556 and 1591, the city contains some excellent examples of late-Renaissance architecture and painting, in which several different aspects feature: a military yet residential town, a Renaissance court, a rural village.

A dazzling example of Lombardy's Renaissance architectural style, enclosed within a defensive wall and accessed by two sombre and monumental gates.

Anyone coming from Mantua - or Parma - sees Sabbioneta surrounded by its massive perimeter wall. Six bastions give it the appearance of an irregular hexagon, part of Vespasiano's original design. The duke also distinguished himself by his water engineering works, which benefited both agriculture and health.

After Vespasiano, the structure of Sabbioneta remained unchanged, and therefore a symbol of unending harmony and passion. In just thirty-five years, a small village with a castle was transformed into an eclectic and ideal Renaissance city, a "Novella Roma”, recognised by UNESCO as a World Heritage Site. It became a powerful bastion inside which the layout of streets and large squares accommodated the buildings of public administration and life at court, along with numerous churches, a synagogue and major cultural institutions (Greek and Latin academies, schools, a mint etc).

With the death of Vespasiano, Sabbioneta began a slow and inexorable decline. Initially it was swallowed up by the estates of the Gonzagas of Mantua and the younger sons of San Martino dall'Argine; then came the unfortunate fate of the Duchy of Mantua, and in 1746 the town fell under the direct control of the Habsburg Empire for fifty years, during which the castle was demolished and the monasteries closed, with the consequent requisitioning of lands and properties. The plundering of the city continued with the subsequent arrival of Napoleonic troops.

The first restoration work involved the redevelopment of the Teatro all'Antica, which was being used as a municipal cinema, and Palazzo Giardino, with the Galleria degli Antichi. Work on the Ducal Palace continued until 1971, ultimately turning the historic building into a monument complex.